So as I mentioned in my previous post, we decided to divide our honeymoon into 2 parts. First was Safari on request of Faizan. We planned our trip with this safari tour company called Kilidove. Its based in Tanzania and this company make customized trips arrording to your budget and requirements. It was ideal for us because we couldnt find a safari that was less than like 5 nights on other pages and they planned a much more relaxed and suitable itinerary for us. The entire thing was planned over emails, payments were made online so we were naturally a little nervous but everything was planned brilliantly and we had the time of our lives. Zero exaggeration.

We booked a 4 day 3 night Safari with Kilidove in which we covered 3 major places.

For people like Faizan and I who love to explore new things but arent exactly crazy wild life enthusiasts, this was actually perfect and we were pretty happy we didnt go with one of those longer safaris because by the end of it I was pretty sure I would live happily going without seeing any more Lions or Zebras up close.

This place was like an incredibly green and beautiful forest. It wasnt a forest but it was so so green and lush that it felt like we were driving in the middle of the forest and before you knew it, there were plains and animals all around us. Here we saw Elephants, a million baboons and different types of monkeys, Zebras, Antelopes, many many different kind of birds, Buffaloes, Wildebeests, Giraffes. You get the point. Lot of animals. No lions or leopards here. The lake however was a major disappointment because it wasnt monsoon reason so pretty dried up and even though it was there we could only see it from really far away since there are certain boundaries set up by the authorities that you can cross for safety purposes. So long distance view of the lake boohoo. 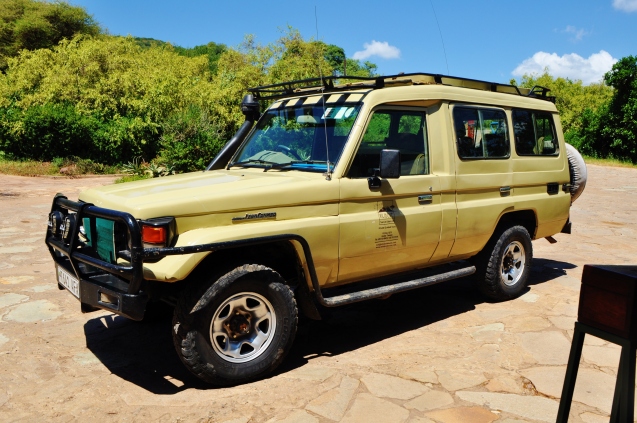 Check out our sweeeeettt ride for the Safari 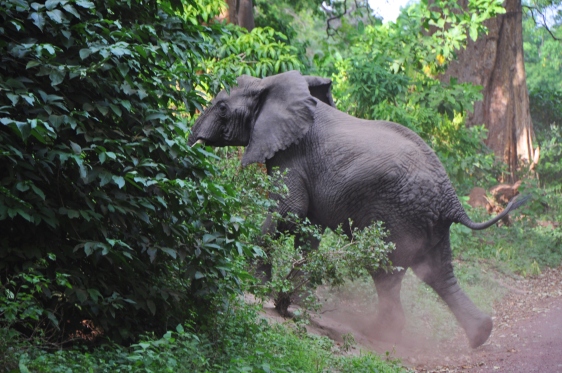 Baby Elephant got scared so ran away 😦

Random couple posing at the park 🙂

Roamed around the park for a good 5/6 hours and then headed back. This night we were provided accommodation at Eileens Tree lodge which was absolutely amazing. 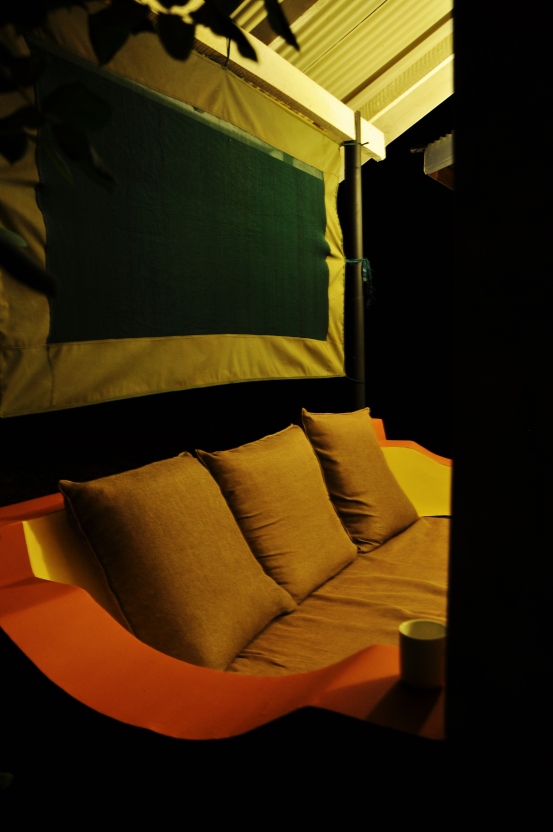 My Favorite spot at Eileens. This tiny sitting area outside our chalet which was surrounded by flowers and trees and I am a loser so took picture at night when nothing was visible.

Day 2 and 3: SERENGETI NATIONAL PARK
This park was the entire reason behind going on a safari because Faizan has apparently “ALWAYS wanted to go there”. I personally never knew it existed before I started planning the honeymoon so no points for me but the more I researched the more excited I got and I was pretty thrilled that day so wooohhooo.

50 shades of blue in this picture and please notice my hand randomly resting on my cheek. WTH?

We left the lodge early morning on day 2 and start driving towards serengeti. It was almost a 3 hour drive from the lodge till the entrance of serengeti but there was so much to see ourside. We entered through the Ngorongoro conservation area, crossed it and then reached Serengeti. 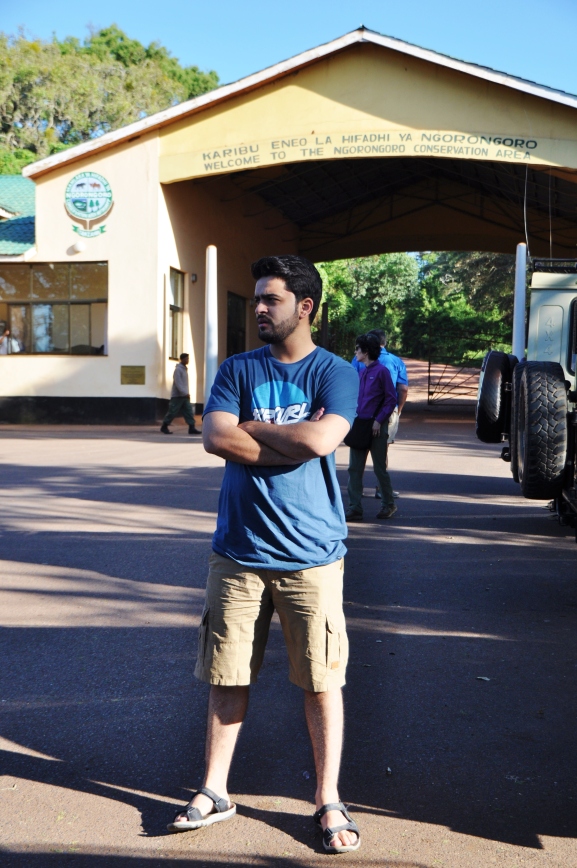 Boy waiting while the driver/guide was getting the paperwork done for our entry in the Ngorongoro conservation area.

Loved these sign painted on the walls pointing towards the rest room. Very important of course, so had to share.

On the way there, suddenly in the middle of nowhere our driver stopped the car and told us he had a surprise for us. When we got off we saw the MOST BEAUTIFUL THING IVE EVER SEEN IN MY LIFE. It  was a view of Ngorongoro crater from the top of this mountain and I was dying because it was insanely gorgeous. I’ve seen quite a bit of the world Alhamdulillah but this was beyond anything I’ve ever seen before.

Picture doing zero justice to what the place actually looks like.

Left there after ooh’ing and aah’ing too much and then stopped once again at a small Masai village. This is a tribe in Africa that lives in the wild, have absolutely no contact with the outside world, no phones, no TV, they make fire with sticks god damn it. They along with the government of Tanzania started this initiative where they take tourists around their village, show them their lifestyle and homes against donations and a fee of $50 per car through which they raise money for their kids education which btw, is also done inside the village because they do not want their kids to get influenced by any “outside world” shiny stuff. They are also protecting the wild life in the area (up for debate really because we read somewhere that if a lion or any other animal hurts their cattle, they kill the animal with their spears as revenge. YIKESSSSSSSS!). What was incredible was really the fact how they live their lives. It was like moving back into some 100 year old place because in all honesty, people like you and I wouldnt even last an hour there. 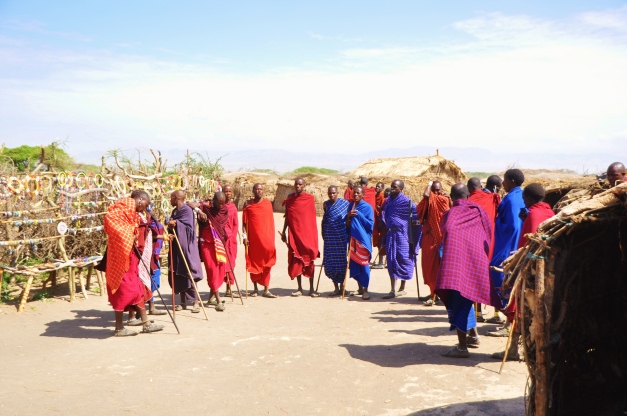 Masai Warriors in their village.

Left the village and then finally on the way to the park. RIGHT before the entrance, we looked on one side and saw atleast 500 zebras and even more wildebeests running in one direction and we were told that that was the head of the great migration (LOOK it up if you dont know about it because its SUPER cool!) and Faiz and I were in absolute awe.

Entered the park and the first thing we did was start looking for lions because thats all what Faizan really wanted to see. Serengeti is endless. Its plains everywhere you look. This season, the grass is a little higher so we had to search a bit for the animals. First day was not as exciting as we imagined because couldnt see a million animals and after watching all those shows on Nat geo from bachpan till now, thats kind of what we were expecting. But even then, we saw lions, lionesses, hippos, buffaloes, giraffes, leopards, monkeys and a few more.

Camped that night inside the park and even though it was extremely exciting, I will be honest and tell you it was horrifying haha. We could hear animals the entire night and that kind of kept us awake and freaked out. More on that when i discuss the best and worst of this trip later.

Saw many many more animals on day 3. Many lions up close so Faizan felt happy finally. Zebras, wildebeests, heartbeests, antelopes, guzeles, monkeys, hippos, giraffes, leopards, 50 kinds of birds and many that i cant honestly recall the names of. 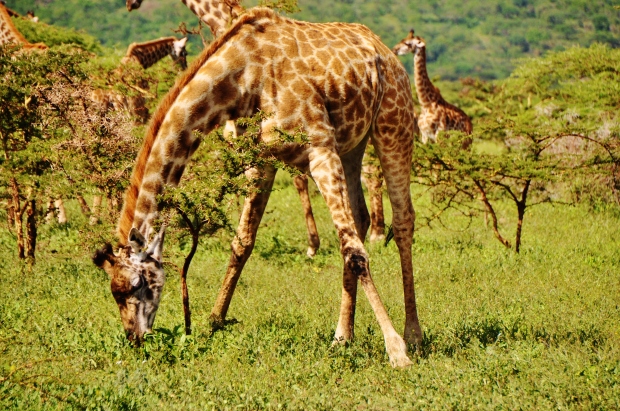 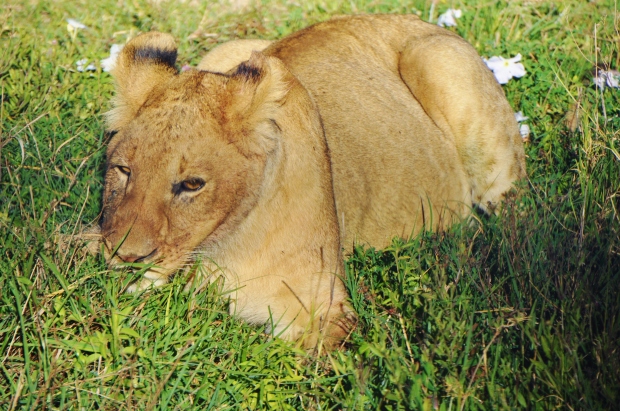 Sick Lioness was eating grass not long before this picture 😦

In the afternoon on day 3, we left the park and drove towards our accommodation for the night which was BEYOND BEAUTIFUL. Rhino Lodge was the name of the place and it was in the middle of heaven. Most gorgeous views, FABULOUS food, their dinning room i wanted to take home with me because it was insanely cozy and pyara.

The amazing view from our room at the Rhino lodge

Hi. I am Fauzia. Lets be friends.